The Chiren® is the latest and most sophisticated instrument developed by Johan Boswinkel for assessment and treatment with biophotons. 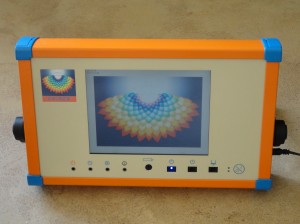 It uses fiber-optic technology to conduct biophotons to and from the body.

With the biofeedback system of the Chiren® the quality of the light in the body is continually improved. A visual display allows patients to see the immediate effects during treatment and adjust their state of relaxation at the same time.

Because of the millions of treatment cycles, that correct biophoton-coherence, per second, there is no risk of misdiagnosis or ill effects. The body takes only the signal that it needs to restore its health.

In the 1970s, pioneering German physicist Fritz-Albert Popp developed a method to observe biophotons and began systematic experiments on a fundamental level, which inspired Boswinkel’s research on the practical applications of this discovery beginning in the 1980s. 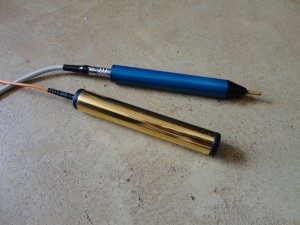 In a typical session, the Biontologist® uses electroacupuncture according to Voll to identify any disturbances in one or more organ systems. If a disturbance (chaotic pattern) is detected, the biontologist® can test it against a counter-signal to a particular ailment to determine whether that information brings the light emission back to a coherent pattern.

During the treatment the Chiren® receives the biophotons emitted by 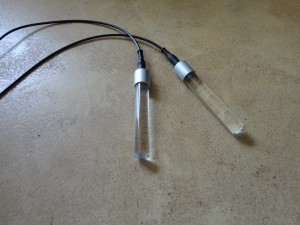 a client through a glass rod held in one hand. Inside the instrument the body’s coherent light is amplified, while the chaotic light is inverted. The light is then sent back to the body via a second glass rod held in the other hand. On this filtered, healthy light, that is not created by the instrument but by the body itself, informational remedies are given to the client. Millions of corrective cycles are made within a second, since biophotons are light particles, which travel with the speed of light. The same process of measurement and treatment is repeated on the feet.

The basic principle of the Chiren®

Because two opposite signals neutralize each other, inverting the chaotic light neutralizes the original signal; therefore, faulty instructions are “deleted”, leading to a correction in the body’s chemistry and relief of symptoms on the physical level.

In the case of a healthy person, the corrective inversions of chaotic light alone will remove any minor disturbance that may be present. The Chiren® without added information will “clean up” or “fine-tune” the body’s light emission.

In the case of a client with a significant imbalance in one or more organ systems, additional counter-signals or informational remedies, that were identified as being helpful in the assessment, are added to the light sent back to the client to help resolve the underlying issue.

The self-corrective cycle created by the Chiren® is very safe, since it only restores the body’s natural ability to self-heal.

A biophoton session is completely noninvasive, and no drugs, supplements, or other substances are administered – only light and information.