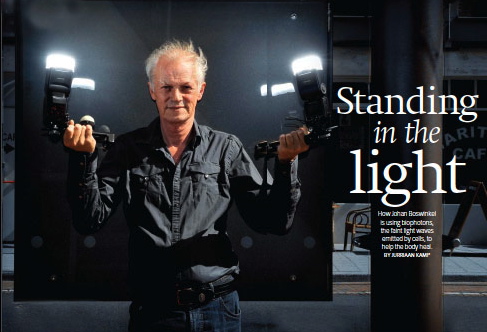 The search for understanding

In the early 1970s, Johan Boswinkel was an Economics student who wondered why economic plans never worked. He concluded that it was because all economic models were missing the “human factor” and he studied Medicine with the hope to learn more about humans.

It was a big disappointment to him that Medicine focussed on isolated parts, rather than on the whole. When he then started to research Psychology, this too appeared to focus only on “types” and models. Disappointed, Boswinkel returned to the world of economics and finance.

The discovery of biophotons

In 1982, by chance Boswinkel was asked to translate the work of Fritz-Albert Popp from German to English. Popp, a German biophysicist, conducted groundbreaking work proving that all cells can emit a very faint light, which he termed biophotons. Popp’s article got him thinking: “If all the information required to control the body’s biochemical processes is in the light that the body emits, and if disturbances in that light disrupt biochemical processes and cause disease—as Popp claimed—then it must be possible to “examine” the light and remove the disease. Then you return the “repaired” light to the body. If it works, it will have enormous consequences for everything.”

Boswinkel immediately began delving deeper into the study of biophotons. He made the critical observation that the patterns of coherent and chaotic biophotons in cells as described by Popp matched the patterns of electrical resistance at acupuncture points as described by Dr. Reinhard Voll, the German founder of electroacupuncture, in the 1940s. Voll also proved that each acupuncture point corresponds to a different organ. Therefore, Boswinkel began work developing a device that determines where biophotons in the body are disturbed based on the electrical response at acupuncture points on the hands and feet. Original instruments were based on analog electrical signals. The advent of fiber-optic technology in the late 1990s, which can directly transmit light, permitted the development of a more sophisticated and powerful instrument – the Chiren®

In the past 30 years, Boswinkel and a growing team of trained Biontologists® have helped thousands of people overcome chronic disease.